This article was published in Franchise Times on 9/31/21. It has been edited to fit this format.

The Top 200+ is now the Franchise Times Top 400. We’ve renamed our annual ranking of the largest U.S.-based franchise systems by systemwide sales to better encompass the biggest brands in franchising along with promising young concepts in growth mode. Our rigorous approach to research remains the same.

In a five-month research process and building upon a database that began in 1999, our research team uses a combination of companies’ voluntary reports and publicly available data, including the franchises’ most recent franchise disclosure documents and Securities and Exchange Commission filings.

Our research team spends months compiling information for the rankings, the five-year sales history graphs, Top 10 lists and industry subcategories, and then reconciling to ensure all published data is accurate and all estimates are based on a solid sales formula.

The research process is as follows:

Systemwide sales is defined as the total sales for both franchise and company units. Those sales figures should represent sales to customers, and not corporate sales to franchisees or prospective franchisees, such as royalty revenue or franchise fees. Other revenue not directly related to franchising should not be included. 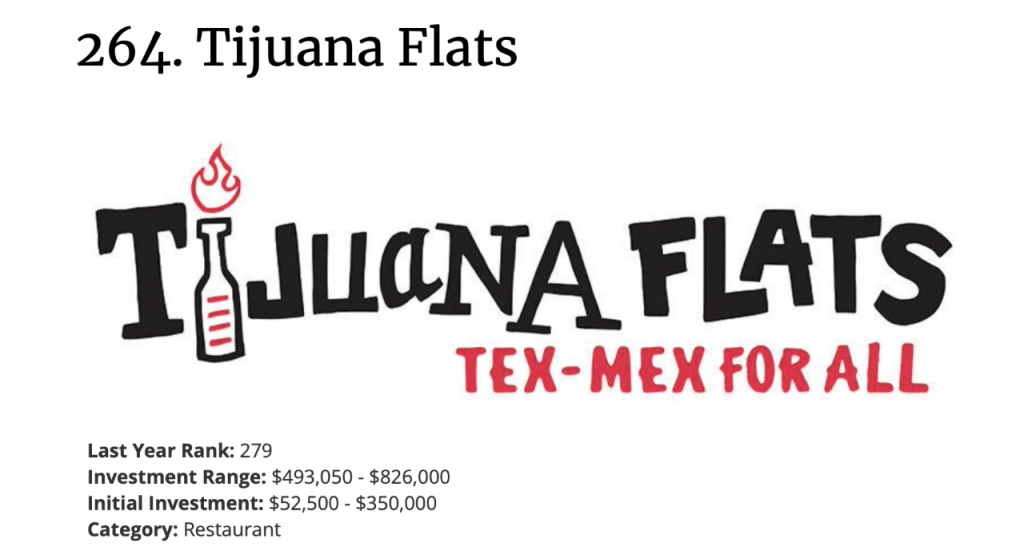 TIJUANA FLATS IS HONORED TO ONCE AGAIN MAKE THIS PRESTIGIOUS LIST OF TOP FRANCHISE COMPANIES.